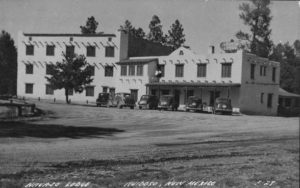 History has taught us that when 12 people gather together, something is surely going to happen. That was true in 1954 when a dozen friends were meeting in the River Room of the Old Navajo Lodge for prayer and study, and on November 26, that year, 26 worshipers gathered and embarked on the first worship service of First Christian Church.

In February 1968, the Rev. Kenneth Cole was installed as pastor. Ken Cole faithfully served the congregation for 21 years; helping her grow as a community of faith centered on the mission of God in Ruidoso. In his tenure, he raised the necessary funds and built the “new” facility on Hull Road. 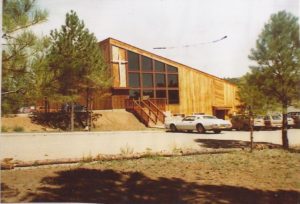 It was in 1991 that the Rev. Bill Kennedy was called to First Christian Church, and led another fruitful chapter in the life of this evolving congregation. Bill Kennedy wrote the script and acted in the re-enactment presented for six straight years as the Lenten gift to the Village of Ruidoso – the Living Lord’s Supper.

The Rev. Dr. James Smith was called in 1998 to serve the ever-inclusive congregation in a tourist community. Under his leadership, First Christian Church initiated and continues to house a Child Development Center that provides “4 Star” childcare for some 60 children. In 2004, he dedicated our Memorial Prayer Garden just south of the main building as a final resting place for members and nonmembers along with a place of meditation and prayer.

In 2008, the congregation expanded the existing building to include a commercial kitchen, choir room, classrooms and spacious multi-purpose room to be used for the Mission of God within Ruidoso.

We are currently looking for a new minister to guide and nurture our congregation.